Why did Melania Trump wore a veil in Rome but not in Riyadh? - Things You Need To Know Today 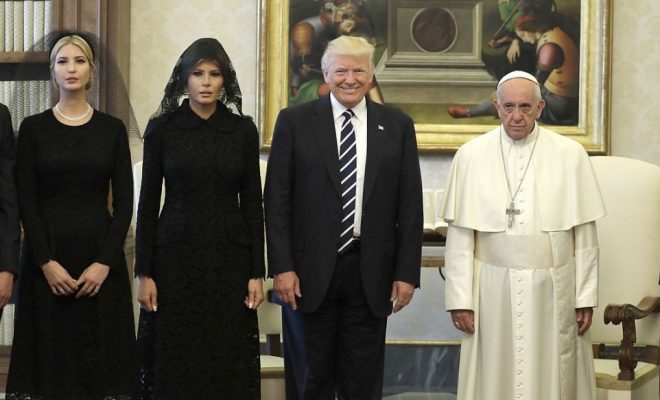 Why did Melania Trump wore a veil in Rome but not in Riyadh?

Melania Trump has again come to the spotlight for yet another reason during her world tour as the first lady of America. There has been a debate going on, comparing her dressing code during her two visits in Saudi Arabia and Vatican. The difference may have caused by diplomatic protocol, religious dictates and personal preference.

In her visit to Saudi Arabia, Melania is seen to be dressed in white suit with black shirt but bare head with no headscarf and a black jump suit. On the other hand, in Vatican while meeting pope, she along with other women like Ivanka trump was seen wearing a black veil or mantilla.

People have shown their thoughts on social media regarding Melania’s choice of outfit. They have said, Melania chose to cover her head in Vatican, not in Saudi Arabia, while the later one is known as a country with strict rule for women to cover their heads and bodies. Others question whether it is right to call wearing scarf in Muslim countries as submission but in Vatican as modesty. 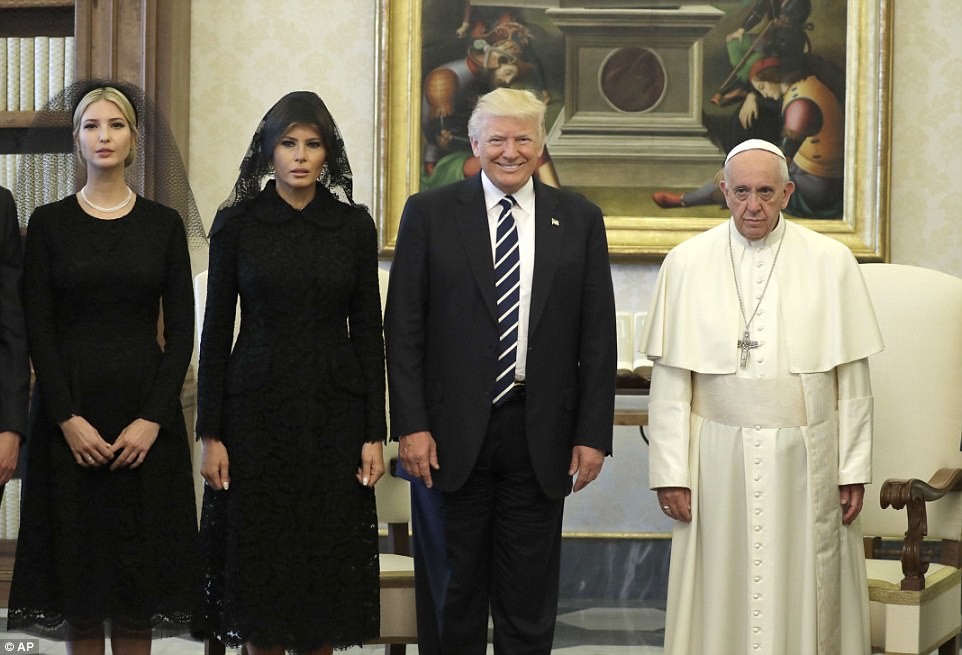 Her Spokeswoman Stephanie Grisham, however, released a statement making the situation clear a bit that the first lady was only following the protocol which asks woman to audience with the pope to wear black clothe with long sleeves and veil to cover their head, “There was no request/requirement for her attire in Saudi”. Thus the first lady was groomed in a Dolce & Gabanna dress with a black veil. Her attire, however, has a striking similarity with one former first lady, Jackie Kennedy.

It’s not the first time this has happened actually. No first lady has ever worn a scarf while in Saudi Arabia. Be it Laura Bush, Michele Obama or Hilary Clinton and also British Prime Minister Theresa May, German Chancellor Markel, Aung Sun Suu Kyi all were seen bare headed while meeting the king of Saudi Arab. Trump then tweeted regarding Michele’s not covering head that it was an insult to the Arabs and there is no point making more enemies.

On the contrary, where Melania’s dressing sense has been raising questions, the local news of Saudi Arab has been positive about her, they have called her “classy and conservative”. Though she didn’t put on scarf on head, locals said that her dress was sort of combination of Arab abaya with the splash of western dazzle.

Another reason for not wearing scarf is that in Saudi, Melania didn’t visit any religious place but  Vatican is the centre of Catholicism.

Jane Hampton Cook, a presidential and first lady historian, thinks that people are misinterpreting it. “The pope is the head of a church. The king of Saudi Arabia is the head of state. There is a difference between seeing a religious leader vs showing respect to a king who’s the head of state”, she says.

Melania also didn’t cover her head while visiting the sacred places of Israel while Ivanka and Donald Trump wore black head covering and yarmulke which is sign of modesty in Orthodox Judaism. But being a Catholic, she didn’t forget to show the right manners in Vatican, which is visible.