Why are Indian women so obsessed with gold? - Things You Need To Know Today 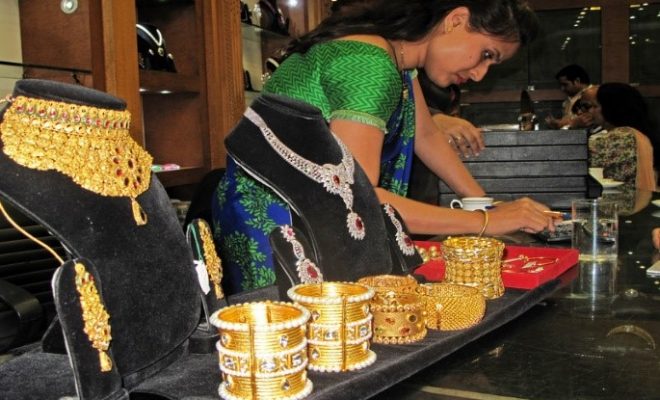 Why are Indian women so obsessed with gold?

The Indian subcontinent is full of different cultures and rituals. They tend to believe a lot of things which are sometimes surprising. Among them, the love for gold is quite prominent. Especially among women, be it in rural areas or urban.

What can be the reason?

As it is a very large continent yet they believe in superstitions largely.  And on that ground, the women are obsessed with gold. Even Indian women follow blindly their goddess of wealth “Laxmi”, to respect the goddess the strict followers perform all the rituals which are connected to gold. One of them is known as “Dhanteras” which a religious festival of Hindu Religion that falls in the Bengali month of Ashwin, and and the day is celebrated on the 13th Lunar day according to the Hindu calendar. On this occasion most of the Indian women buy gold as they consider buying gold on this eve is auspicious and good for the upcoming days.

The followers of Goddess Laxmi also loves to wear gold always as they think it brings good luck or good fortune. Apart from this, the ancient culture of India also another reason why they are fond of gold. It’s kind of age-old dogma, they love gold as they are used to it. They are seeing that gold is getting an extra attraction so subconsciously they are also giving the same importance.

On the other hand, the mythological stories may also be the reason why Indian women are obsessed with gold. There is a story where a King named Hima whose son was predicted that he would die because of snake bite.  So his bride didn’t let her husband sleep and kept all the ornaments in the doorway surrounded by lamps. She kept singing so that her husband don’t fall asleep. So it happened when the God of Death Yama visited the door in form of serpent. The reflection of the ornaments in front of the lamp made him be dazzled and he went back without taking the life of the son of King Hima. To respect this mythological story, the Indians follow tradition still and women feel that gold is so auspicious that it will protect the family from any harm.

Different kinds of superstitious stories, social backdrop and ancient rules and regulations that can be considered as age-old tradition of Indian subcontinent can also be considered another reason for the obsession of gold of female folks. Nevertheless, they while inaugurating any happy and auspicious occasion use gold coin too. Even, if there is any marriage they try their level best to add gold as jewelry. There is a reason behind it. The Indians consider daughter –in-law as the fortune of the family and gold is considered as the symbol of prosperity which makes the daughter-in-law fortune with prosperity. Indian people gives importance to such kind of hypothesis especially in the south who are called South Indians which results in their obsession for gold.