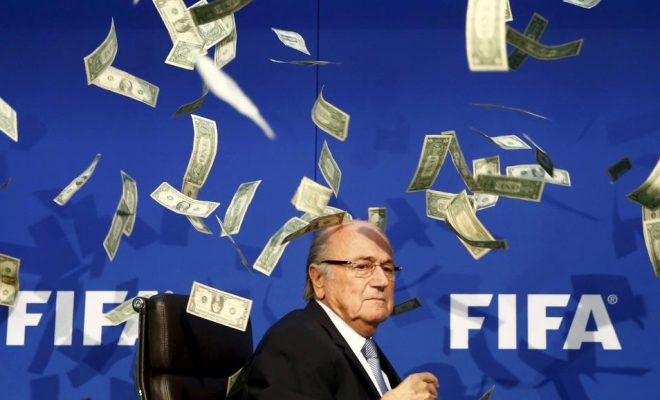 The corruption case at International Federation of Football (FIFA), also known as Fifagate, is an investigation into suspicions of corruption within the FIFA. In May 2015, fourteen people, including nine senior officials of the governing body of world football, are charged in an investigation by the FBI (thanks in particular to its informant Chuck Blazer, a former FIFA executive accused of corruption and has been cooperating with the US agency for more than three years) for racketeering, fraud and money laundering over a 25-year period, with suspicions of corruption mainly affecting the awarding of several World Cups and contracts marketing.

On May the 27th 2015, seven FIFA officials were arrested at the Hotel “Baur au Lac” in Zurich, where they were preparing to attend the 65th FIFA Congress in which the election of the FIFA Presidency is to take place. They are supposed to be extradited to the United States on suspicion of soliciting and receiving more than 150 million dollars in bribes and retro-commissions. A simultaneous police operation was also held at the CONCACAF headquarters in Miami.

On September the 17th 2015, the FIFA announced that its Secretary General Jérôme Valcke had been dismissed and asked for an investigation by the Ethics Committee.

On September the 29th 2015, the President of the Confederation of North America, Central America and the Caribbean (CONCACAF) Jack Warner is suspended for life from all activities related to football by the International Federation’s ethics commission. It acknowledged him “guilty of various wrongdoings on a continuous and repeated basis during the period in which he held various high-level posts at Fifa and Concacaf”, and in particular having “proposed or accepted illegal payments”.

On December the 21st of the same year, UEFA President Michel Platini and FIFA President Sepp Blatter (all 2 members of the FIFA Executive Committee) have been suspended from football for an eight-year term.

On March the 31st, 2017, the FIFA announced that it had handed over to Switzerland the results of its internal investigation, opened in June 2015, just after the most serious corruption crisis in its history, marked by the forced departure of its emblematic former president Joseph Blatter.

To the extent that proceedings are opened in Switzerland and the United States, no details have been provided on the content of this report, as Fifa is “legally obliged not to disclose or comment on the findings of its internal investigation”.

In a separate file from the internal investigation now completed, Mr. Blatter was forced to resign and suspended by the domestic court for a suspicious payment of 2 million Swiss francs (more than $ 2 million) to Michel Platini, the French the ex-president of the UEFA, who also got a four-year suspension.

Mr. Blatter is also being prosecuted by the Swiss courts for “unfair management”, in particular for this suspicious payment to Platini, heard by the Swiss judiciary as an assisted witness.

In total, there are 40 people who are aimed by the American justice. Most of them are leaders of the FIFA, the Football Confederation of North America, Central America and the Caribbean (Concacaf), or managers of sports marketing companies.

Some of them pleaded guilty, avoiding a trial and allowing them to go directly to judgment.

Five defendants who pleaded not guilty will be tried in New York from next November the 6th.